In 2016, French films attracted 34 million spectators in international markets*, generating €230 million in box office revenue**. Following a high of over 111 million admissions in 2015, 2016 marks a decline in attendance figures, with the lowest results registered in over ten years.

2016, a year of downturn for French films in international markets:

– The first year to register less than 50 million admissions in over 10 years.
– Half as many admissions registered abroad as in France.

A YEAR OF FRENCH FILMS IN INTERNATIONAL THEATERS

This sharp decline in movie attendance in 2016 can be primarily attributed the absence of outstanding titles, in the likes of Taken 3 (which amassed 44 million admissions in 2015). Even though the number of films distributed was equivalent to the average figures of recent years, only two majority-French films (The Little Prince and Shut In) managed to reach 1 million admissions in 2016, compared to 9 titles in 2015.

As a direct consequence of this absence of blockbuster titles, movie attendance in 2016 dropped to its lowest level since the 2000s. The 5 most successful French films of 2016 account for only 28.3% of overall admissions to French productions abroad, compared to 70.5% in 2015. An important consequence of this decline is that French-language films registered 22 million spectators in 2016, which represents almost 64% of all admissions in this period, marking a record high in the past 15 years and far exceeding the average of 43.6% recorded in the past 10 years.

The dispersion of admissions to French films highlights the successful performance of a number of titles in local markets, and allows for French-language productions to hold a stronger position among the year's high achievers, such as the surprise popularity in Germany of A Sense of Wonder and The Student and Mr. Henri, with both titles featuring in Germany’s Top 10 titles of 2016. This fragmentation of results is also connected to the remarkable ongoing career of the already record-breaking film The Little Prince, which, after a spectacularly successful year in 2015 (in which it amassed 15 million admissions) continues to win over audiences in its second year of international release. With over 3 million admissions registered in around forty markets, The Little Prince ranks as the most successful French production of 2016 and the most popular French animated film of all time in international theaters.

The remaining titles in the Top 10 for 2016 also exemplify the appeal of the diversity of French production genres. The year's 2nd best performer, the English-language thriller Shut In, and the documentary Seasons (in 6th place), illustrate the vitality of genre films in international markets.* Comedies were not left out of the spotlight, with excellent performances by The New Adventures of Aladdin and Up for Love. To complete the Top 10, Mustang, Monsieur Chocolat, and Elle bear witness to the quality of French dramas.

Furthermore, despite a lackluster year in 2016 overall, audience interest in French films remains strong, as demonstrated by record attendance figures at two events in 2016: the 20th Tour de Cine Francés (410,000 spectators, +28% over 2015) and the 27th Alliance Française French Film Festival in Australia (168,000 admissions), two events dedicated exclusively to French films. In addition, more than ten majority-French productions attracted more spectators outside France in 2016 than in the home market, including A Sense of Wonder, Macadam Stories, Francofonia, and Mustang. The downtrend in this year’s results thus in no way undermines the central place occupied by French cinema in the international scene. ANALYSIS OF THE TOP 5 TITLES

1
In its second year of distribution in international theaters, The Little Prince continues to achieve impressive results, standing out as the most successful French film of 2016 outside France. Having been declared the best-performing French animated film of all time according to UniFrance statistics, The Little Prince has consolidated its status with over 3 million admissions added to its overall score in 2016, in around 40 markets including over 1.5 million admissions in Italy, which sets a new record for French animated films in this market.

2
Ranking as the second majority-French production to have garnered more than 1 million spectators abroad in 2016, Shut In proved a success from its opening week, ranking it as the most successful French film of the year in around ten international markets, including the USA and English-speaking Canada (817,000 admissions), Mexico (443,000), Colombia (115,000), and Argentina (73,000).

3
The biggest surprise of the year came from A Sense of Wonder, which takes 3rd position in our charts. Credited with over 683,000 admissions in Germany, it was the best-performing French film of 2016 in this market and attracted more than twice as many spectators in Germany as in France (259,000 spectators).

4
The New Adventures of Aladdin set a new record for the most ambitious French release in China according to UniFrance statistics. Released on around 4,000 screens on its opening day, it is the most successful French film of 2016 in China, tallying 663,000 admissions. Its release also highlights the difficult task of breaking into the fiercely competitive Chinese theatrical market at this time.

5
Another ambassador for French comedies in 2016, Up for Love achieved the best results for a French film in Polish theaters, with a total of 185,000 admissions to its credit. It also attracted 153,000 moviegoers in Russia and 114,000 in Italy.

In spite of a 39% decline in movie attendance compared to 2015, Western Europe returns as the number 1 market region for French films in 2016. Accounting for 16.9 million admissions this year, Western Europe secured close to 50% of all admission registered outside France. Another particularity in 2016 is the very low concentration of these results, since the trio of most-successful titles, The Little Prince, A Sense of Wonder, and The Student and Mr. Henri represent just 20% of all admissions in Western Europe. We can also observe a strong comeback by a number of countries that were traditionally leading export markets for French films—Italy, Germany, Spain, Belgium (with Luxembourg)—which join the Top 5 export countries in 2016, behind the USA/Canada.

Bolstered primarily by the excellent results of Shut In and Miss Sloane, North America regained its position as the second biggest export region in 2016. Of the 6.3 million spectators recorded in this period, 676,000 were generated in Quebec, due notably to the 86,000 admissions scored by The Little Prince. This figure also includes the excellent results of Tomorrow and The Cow, which complete the list of top-performers. Accounting for 5.5 million admissions, the United States and English-speaking Canada once again rank as the leading market for French film exports in 2016.

Following in the wake of an exceptional year in 2015, Latin America retains its position as the 3rd biggest export region for French films, despite a decline of over 83% in attendance figures (3.7 million admissions). While Shut In generated over 19% of total admissions, we can also note the triumphant performances of Mon roi in Mexico and The Cow in Colombia, which both garnered over 100,000 spectators. Another highlight of 2016 is the record attendance figures registered at the 20th French Film Tour, at which 410,000 movie enthusiasts flocked to theaters in Mexico and Central America to watch seven French productions.

With less than 3 million spectators registered, Asia dropped back to fifth place among export regions for French films, due once again to the lack of hit titles in 2016, in the likes of last year's big winners Taken 3, The Transporter Legacy, and The Little Prince. Indeed, the best-performing French title in this region, The New Adventures of Aladdin, did not succeed in topping 1 million spectators. In China, in particular, admissions plummeted by over 93%, despite an identical number of titles released as in 2015 (5 films), with none of these titles achieving higher admissions scores than in France. However, it is worth pointing out the performance of the documentary Seasons in Japan (421,000 admissions), which was the second most successful film in this region.

Oceania saw movie admissions for French productions slipping back by almost 65% in 2016. In spite of an encouraging increase in attendance at the 27th Alliance Française French Film Festival in Australia (+12.5%), this region captured less than 2.5% of overall admissions for French films in this period. The Bélier Family nonetheless hit the mark in Australian theaters, pulling in 122,000 admissions. 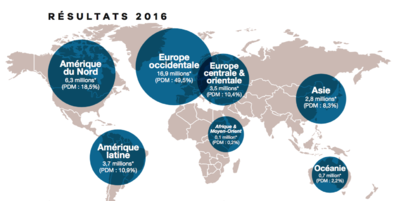 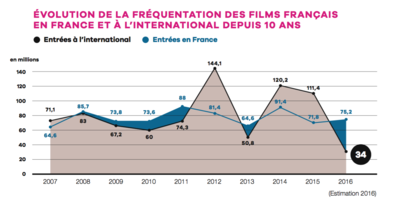 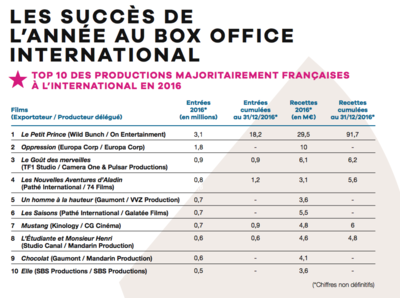