Rendez-vous with French Cinema in London and Edinburgh

The event dedicated to French cinema organized by Unifrance is back in London and will this year extend to Edinburgh March 16 through 20.

Six French films will be given premiere public screenings ahead of their release by British distributors:


The screenings will take place in London at the Curzon Soho, Ciné Lumière and BFI Southbank, and at the Filmhouse in Edinburg.

The Unifrance-organized event dedicated to French cinema, Rendez-vous with French Cinema in the UK, is back in London, and will this year extend its scope to Edinburgh from March 16 through 20.


Luc Besson, Rose Bosch, Fred Cavayé, François Ozon, Katell Quillévéré, Bertrand Tavernier, Mélanie Thierry, and Gaspard Ulliel will be present to present and promote their films, and to meet the public at Q & A sessions after the screenings.

The Rendez-Vous with French Cinema in London & Edinburgh - 2011 are organized by Unifrance Films, in association with the French Embassy and the French Institute in London.

With 1.6 million spectators in 2010, admissions for French films in Great Britain increased by 49% compared with 2009, and realized their best score of the past five years.

A Prophet by Jacques Audiard (256,000 admissions), Heartbreaker by Pascal Chaumeil (135,000), and Gainsbourg: Je t'aime... Moi non plus (115,000) are among the 43 French productions released in English theaters, which registered 2.57 million admissions in 2010, an average result among those achieved over the past five years.

Rendez-vous with French Cinema in London and Edinburgh 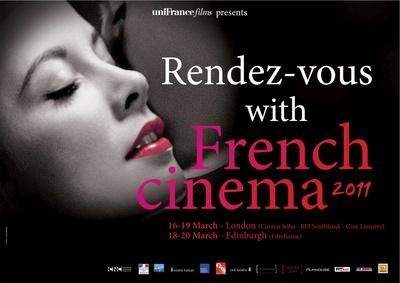 Recent filmography : Where Do We Go Now?, Heartbreaker, The Roundup, ...

Recent filmography : The Old Oak, 10 days Without Mum, Capital in the Twenty-First Century, ...

Recent filmography : Eiffel, Around the World in 80 Days, Pinocchio, ...

Rendez-vous with French Cinema in the UK - 2011