For the third time in just four years, French films passed the 100 million spectator benchmark in foreign theaters in 2015. With 106 million admissions and €600 million in box office revenues registered outside France, French cinema celebrates 2015 as its third most successful year abroad in more than twenty years.

A YEAR OF FRENCH CINEMA ABROAD

"It is a unique opportunity for French films to have gained such international recognition," declared Isabelle Giordano, executive director of UniFrance. "These fine results in international theaters reinforce our position as the world's second biggest exporter of film product, and are a clear indication that our ecosystem is efficient and that it is advantageous to value the diversity of our talent. French films are alone in being just as highly-appreciated in international markets as they are at the major international festivals. In an unprecedented situation, French cinema has registered a higher number of admissions abroad than in the home market for the second year running, with attendance figures 46% higher in theaters outside France."

Among the 10 most successful titles in 2015, a list that stands out for the diversity of genres represented (including thrillers, comedies, dramas, and documentaries), it is above all French animated films that triumphed in international theaters.

"2015 demonstrated the strong presence of French animated films in international markets, with the following titles featuring among the Top 10 films of the year: The Little Prince, Asterix - The Mansion of the Gods, and Mune," explains UniFrance president Jean-Paul Salomé. "It is one of French cinema's great strengths to be able to position itself in a variety of genres with strong appeal and to produce talented filmmakers who can reach out to family audiences all over the world."

Accounting for 20% of overall admissions and counting 3 films among the 10 most successful titles of the year, French animated films put in a record performance in 2015. The Little Prince ranks as the second best-performing film of the year with 15 million admissions registered, and stands out as the most successful French animated film abroad in the past 20 years. Added to the excellent results of Asterix - The Mansion of the Gods, Mune, and Yellowbird, this record set by animated films sends out a strong message about the dynamism and high standards of savoir faire in the French animation sector.

Among other major triumphs of 2015, the third installment in the Taken saga dominated the scene, on its own attracting 40% of all spectators to French productions in this period. Just behind The Little Prince, The Transporter Legacy, a majority-French production shot in English, completes the Top 3. Comedies were also in the spotlight in 2015, as seen in the worldwide success of The Bélier Family and the continued release of the already established hit Serial (Bad) Weddings. With Samba, Beauty and the Beast, and The Salt of the Earth added to this list of top titles, 2015 once again illustrates the diversity of productions and of audiences for French films outside France. ANALYSIS OF THE TOP 5 TITLES

Taken 3 was the most successful French title in foreign theaters in 2015, with close to 44 million spectators registered in around 80 markets, including 10.7 million admissions in the USA and English-speaking Canada, and 5.4 million in China. It attracted more than 1 million spectators in 10 markets.

The Little Prince now stands as the most successful French animated film of all time in foreign theaters according to UniFrance statistics. With a total of 15 million admissions registered in 2015, it has broken admissions records for French films in Brazil and Mexico (2 million spectators).

With 3.5 million admissions amassed in around forty markets, La Famille Bélier set a new attendance record for a French-language films in Colombia (537,000 admissions), thus eclipsing The Intouchables. It also attracted close to 500,000 moviegoers in Italy, 430,000 in Germany, 380,000 in Spain, and 150,000 in Quebec.

For the first time, Asia became the number 1 export destination for French films in 2015. Registering 28.9 million admissions, this region accounted for more than one quarter of all admissions to French productions in the period. Taken 3, The Little Prince and The Transporter Legacy generated 90% of all movie admissions in the region. Another important development is that China is now positioned at the same level as the USA and English-speaking Canada, thanks to the almost 15 million Chinese spectators registered in 2015. 3.5 million Japanese moviegoers and 2.2 million South Koreans also turned out to see French films in 2015.

With 25.6 million admissions registered, Western Europe thus dropped back to 2nd position for French film exports in 2015, marking a year that showed only modest results in Germany (4.7 million admissions), accompanied by the continuation of an alarming situation in the United Kingdom. Italy was the only European country to appear in the Top 5 scores of the year, with 5.2 million admissions recorded, notably due to fine performances by Serial (Bad) Weddings, The Bélier Family, and Wolf Totem by Jean-Jacques Annaud. Together with Central and Eastern Europe, Western Euope was the region that was the most receptive to French-language productions in 2015, with almost 60% of admissions to these films generated in these regions.

Record admissions to French productions were achieved in Latin America in 2015. With a total of 22.3 million admissions, which represents more than 1 out of 5 spectators of French films globally, 2015 was a landmark year for French films in this region, a development that is allied with a spectacular increase in national movie attendance and the rapidly expanding number of theaters in operation in several Latin American countries at this time. Admissions to French films hit record highs in Mexico (9.4 million admissions, +76% against 2014), Brazil (5.3 million, +44%), and Colombia (2.4 million, +116%), with the former two countries breaking into the Top 5 countries, ahead of Italy.

North America fell back to 4th position in export zones for French films in 2015, due to an absence of major box office hits, such as Lucy the previous year. Nonetheless, if we add the successful score of Taken 3 to the figures for Clouds of Sils Maria, Timbuktu, and The Salt of the Earth in the USA and English-speaking Canada, the results are encouraging for French auteur cinema in this market. In Quebec, attendance figures came close to 900,000 admissions, including just under 200,000 for Asterix - The Mansion of the Gods, which is the most successful French-language film in this market since The Intouchables.

As in other regions, Taken 3 dominated the results for French films in Central and Eastern in 2015. However, French animated films managed to make their mark thanks to excellent performances by The Little Prince, Mune, Asterix and Yellowbird, all four of which achieved some of the highest results in the region along with the English-language productions by EuropaCorp. In Poland, French films attracted a total of 2.7 million spectators, including 775,000 for The Little Prince. 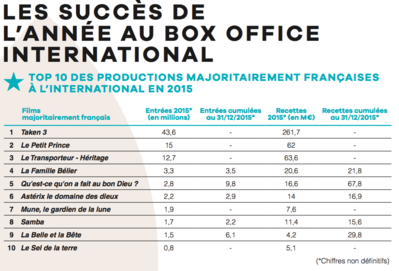 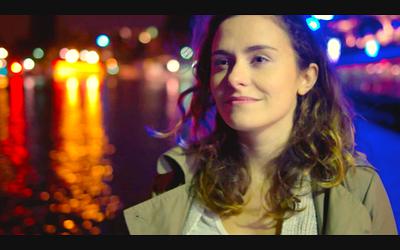