1587, 1642, 1789, 1995, times change and Connor MacLeod, the Highlander, remains immortal. After all these centuries, this man is tired of seeing the people around him die and wants a quieter life. To prove this, he adopts a child, making an impossible dream of paternity come true... The immortals cannot have heirs. But Kane, an evil immortal, awakes the warrior that slumbers in MacLeod.

"This third episode is marked by astounding advances on the technical level. The figures speak for themselves : a budget of $34 million, 4 crews of more than 500 people, 15 tonnes of material, 30,000 kilometres travelled and 23 sets in 4 different countries. This Anglo-Franco-canadian co-production was released in 1,200 theatres in the US (...). The special effects required eight months of intensive work (...), but during the shoot itself, 30 people designed the natural, pyrotechnic and mechanical effects (...). Like the first two episodes, "Highlander IIi" is a genuine research laboratory in special effects(...). Andy Morahan's film (...) is a worthy continuation of fantastic and science fiction cinema that has brought wending progress to film technology since the birth of the silver screen(...)"
(Jean-Philippe Guérand - Le Film Français) 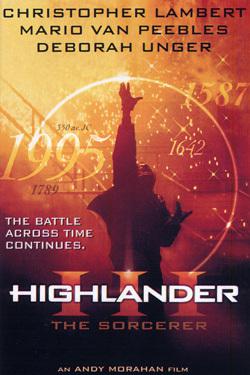