The 17th edition of Rendez-Vous With French Cinema à New York, the Film Society of Lincoln Center and Unifrance Films’ celebrated annual showcase of the best in contemporary French film, hits screens at The Film Society, the IFC Center and BAMcinématek, March 1-11.

More than two dozen New York premieres will be showcased during the series, including box-office sensation The Intouchables; new work from master directors André Téchiné, Benoit Jacquot and Alain Cavalier, a beautifully restored print of one of the best-loved masterworks of French cinema and our special Centerpiece, Marcel Carné’s Children of Paradise; plus the Closing Night selection, Delicacy, the latest from Audrey Tautou, who will be on hand to present the film.

This year also marks the first collaboration with Emerging Pictures on a select number of titles including Delphine Gleize’s The Moon Child, Rabah Ameur-Zaïméche's Smuggler's Songs, Alain Cavalier's Pater, Laurent Achard's Ultimate Screening, Daniel Auteuil's The Well Digger's Daughter and Mathieu Amalric’s The Screen Illusion. The films will be showing in over 50 venues across the country contemporaneously with their showings at Lincoln Center via Emerging's network of digital theaters. Q&A's from the Film Society venues will be broadcast live to many of those locations.

Film Society of Lincoln Center Program Director Richard Pena notes, "Rendez-Vous with French Cinema is always a great event in the annual cycle of the Film Society; we're very proud of all its success over the years, and this year our line-up once again provides solid evidence of how vital, varied and challenging the French cinema remains."

Opening Night launches with The Intouchables, an unprecedented box-office phenomenon in France, where it shattered records to become the second most successful French film of all time. The Intouchables tells the true story of the unlikely friendship between a handicapped white millionaire and his unconventional Senegalese caretaker. Paralyzed from the neck down in a paragliding accident, Philippe (Tell No One star François Cluzet) has grown weary of the pitying attentions of his live-in help. So he hires Driss (Omar Sy, in a breakout performance), a recently paroled convict who only applied for the job in order to continue receiving his welfare payments. Gradually, these two men from very different worlds grow close, sharing in the joy and pain of each other’s lives in this hilarious and heartwarming crowd-pleaser from directors Olivier Nakache and Éric Toledano, who will be in attendance along with François Cluzet. The Weinstein Company plans to release the film May 2012.

Other highlights at this year’s festival include New French Shorts, a prize-winning selection of provocative short films from France; a 60th anniversary tribute to pioneering French film magazine Positif with Michel Ciment, the founding editor in person presenting some of his favorite seldom-seen films; and screenings for the family, including a beautifully hand-drawn animated film Zarafa, and, a collaboration with the New York International Children’s Film Festival for a special screening of Jean-François Laguionie’s wonderfully touching animated fable The Painting.

“We’re happy to provide a rich selection of new French films for the 17th edition of Rendez-Vous with French Cinema” says Régine Hatchondo, Executive Director of Unifrance Films. “The impact of this film festival is underscored by the partnership and efforts of the Film Society, IFC Center and BAM to offer New York City fans of French cinema greater access to see these new films. We’re also very excited about a new initiative presented by Emerging Pictures in conjunction with the Film Society and Unifrance Films, offering a selection of films in 50 cities throughout the United States.”

Tickets are available online for each participating venue at www.filmlinc.com, www.ifccenter.com and www.BAM.org/BAMcinematek respectively, as well as directly from the box offices. For more information, call The Film Society at (212) 875-5601, the IFC Center at (212) 924-7771, or BAM at (718) 636-4100 x2 or please visit: www.rendezvouswithfrenchcinema.com. Tickets for Opening Night are available online at www.filmlinc.com and at Alice Tully Hall Box Office, 1941 Broadway (on 65th St between Broadway and Amsterdam). 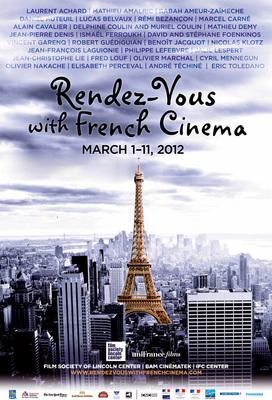