The annual Rendez-vous with French Cinema in India is back to quench the thirst of movie aficionados from December 4 through 7, 2010.

Mumbai, November 16, 2010: the metropolis is readying itself for another year of cinematic treats with the upcoming 3rd Rendez-vous with French cinema in India. This four-day cine-fest co-organized by the French Embassy in India and Unifrance will be held in Mumbai from December 4 through 7. The festival seeks to provide a platform for showcasing the various facets of French contemporary cinema in India, to assist Indian distributors in promoting French films, and to celebrate strengthening ties between India and France.

A total of seven French movies will be screened at the festival. All films are subtitled in English and will be screened at Metro BIG Cinemas (Dhobitalao) and Fun Cinemas (Andheri). The event will open with a screening of Heartbreaker, a romantic comedy starring Romain Duris, Vanessa Paradis, and Julie Ferrier. The multi-talented Julie Ferrier (actress and comedian) is among members of the French delegation traveling to Mumbai. The film will be distributed in India by PictureWorks.

Of Gods and Men by Xavier Beauvois, Potiche by Francois Ozon, Oceans by Jacques Perrin and Jacques Cluzaud, Sarah's Key by Gilles Paquet-Brenner, Carlos by Olivier Assayas, and Love Crime by Alain Corneau complete the selection of movies presented at the festival.

Of Gods and Men deserves a special mention here after its Grand Prize win at the 2010 Cannes Film Festival and its selection to represent France at the 2011 Academy Awards.

The British actress Kristin Scott Thomas (Sarah's Key, Love Crime) whose career spans across France, England, and the United States, is perhaps best-known for her role as an unfaithful wife in The English Patient, one of the biggest screen successes of 1996. She was nominated for an Academy Award for Best Actress in 1997, which soon propelled her to international stardom. In her prolific career, she has appeared opposite Hugh Grant in Bitter Moon, Harrison Ford in Sidney Pollack's Random Hearts, and in the global hit Four Weddings and a Funeral.

The festival will be paying tribute to Alain Corneau, who passed away on August 30 this year, less than a fortnight after his film Love Crime was released. Alain Corneau had a particular fondness for India. He was a jury member at many Indian film festivals and shot Nocturne Indien in various locations around India in 1988, returning to India many times after that.

In the words of Unifrance executive director Régine Hatchondo, the eclectic mix of films showcased at the 3rd Rendez-vous with French Cinema in India is set to mesmerize Indian audiences, highlight the extraordinary diversity of current French filmmaking, and build relationships with Indian distributors by increasing their exposure to new films and offering financial assistance for commercial release.

Thanks to the support of both governments, regional communities, and French and Indian corporations, the festival promises to be a great event celebrating French cinema in India. All passes for the festival are free, allocated on a strictly "first come first served" basis (limited to 2 passes per person). These passes may be collected at the entrance of the cinemas, one hour prior to the screening time of each film. 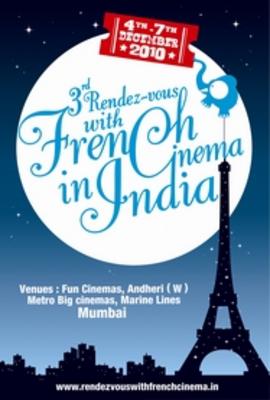 Rendez-vous with French cinema in India - 2010