French cinema continues to make headlines in the international press! In January, foreign journalists were charmed by a romcom in The Netherlands, echoed the success of a judicial chronicle in Spain, overtook the Japanese media reporting about an action film, and voiced their opinions about the Rendez-Vous with French Cinema in Paris organized by UniFrance.

La Belle Epoque released in The Netherlands on January 2 and the Dutch press fell under its spell:

De Filmkrant, the country's most important independent film magazine, presented nostalgia as a "disorder," and said that the film deliberately explores, and in an engaging way, the generational phenomenon of nostalgia: "Was everything truly better before?"
https://filmkrant.nl/recensies/la-belle-epoque/ 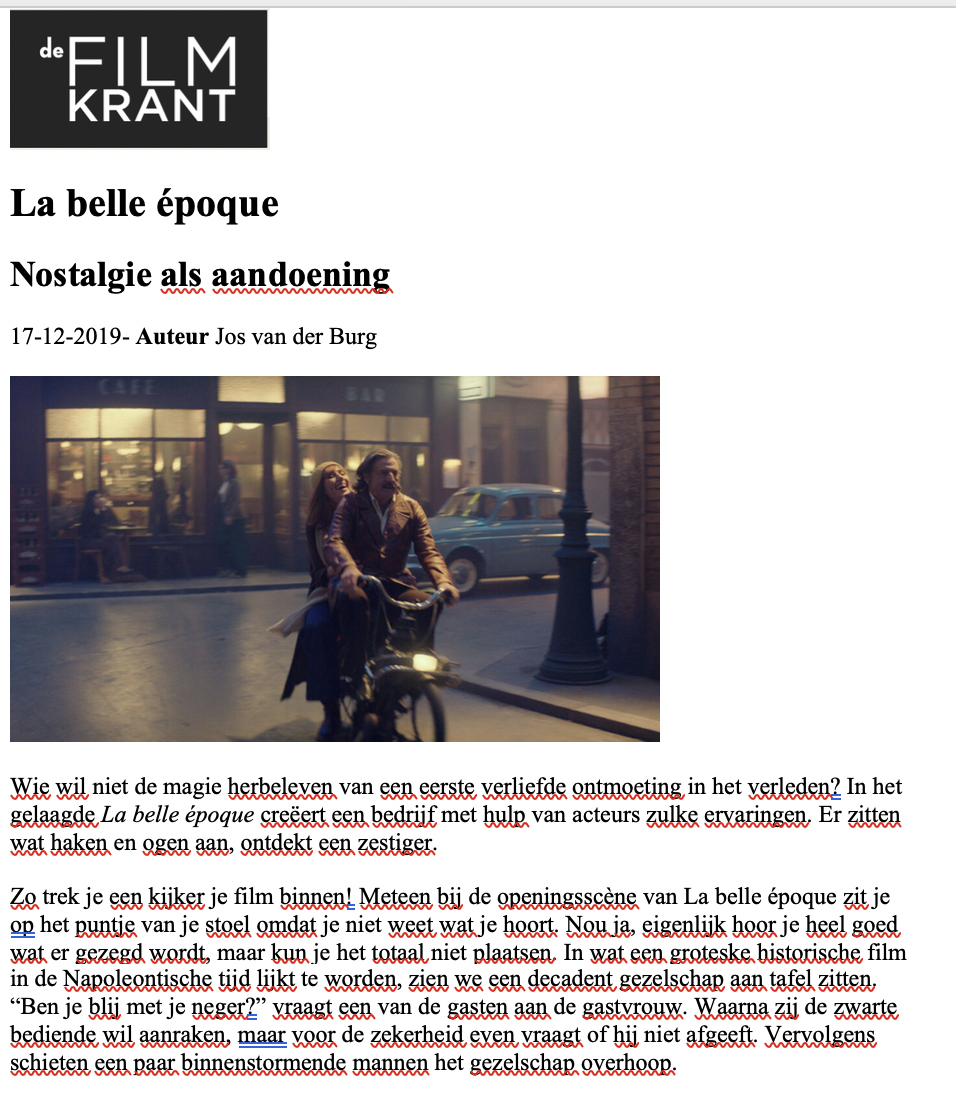 Volkskrant, the third leading daily of The Netherlands, declared that La Belle Epoque "is more than a criticism of the nostalgia industry (...) but, ultimately, proves to be a romcom that's enjoyable to watch."
https://www.volkskrant.nl/cultuur-media/la-belle-epoque-is-nog-meer-dan-een-kritiek-op-de-nostalgie-industrie-een-licht-verteerbare-romkom~b9ad4ca8/

De Telegraaf, the country's leading daily, meanwhile emphasized that the film urges us "to be young and to fall in love again" and that it "plays with the distance created by incredulity and manages to prevent the romantic side to prematurely rush in."
ttps://www.telegraaf.nl/entertainment/735716758/even-weer-jong-en-dolverliefd-zijn

An Officer and a Spy arrived on Spanish screens on January 1, 2020 and to date has attracted 160,233 spectators, the second best result internationally.

Spanish critic Carlos Boyero celebrated Polanski's return to period cinema in El País, highlighting "his style devoid of sentimentality" and delighted in the fact that it "appeals to spectators' minds rather than to emotional outpouring."
https://elpais.com/cultura/2019/12/29/actualidad/1577640596_741839.html 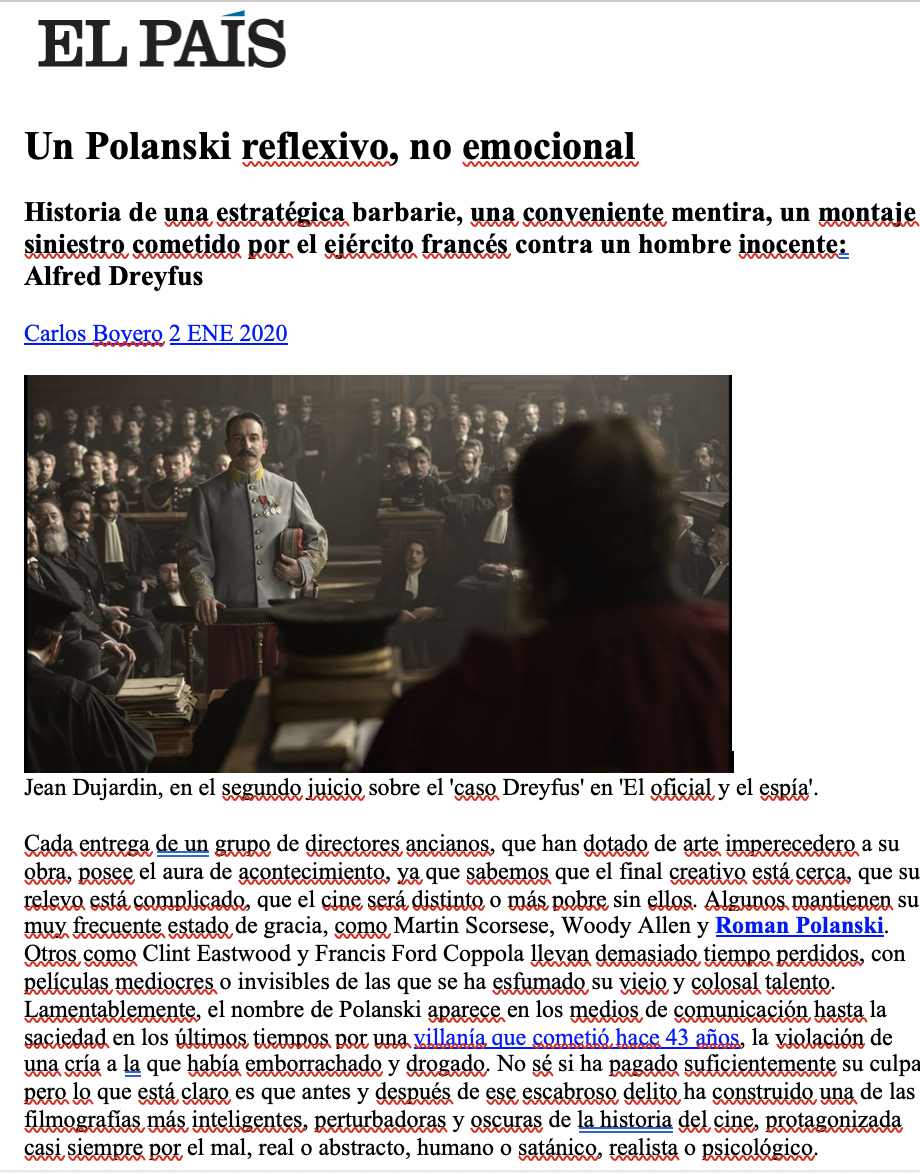 La Vanguardia, for its part, defined the film as "an impeccable work, a reconstruction devoid of artifice of a famous case."

The conservative daily ABC declared that it was "wonderfully shot, written, and acted (...) great cinema."

City Hunter has been a hit in Japan, proving Philippe Lacheau right to have been determined to adapt the hugely popular manga City Hunter for the cinema. As Japan's main movie website www.cinema.ne.jp recounts, the release of City Hunter The Movie (the film's Japanese title) had been highly anticipated among the fan community. The result met expectations, with 127,406 admissions to date. 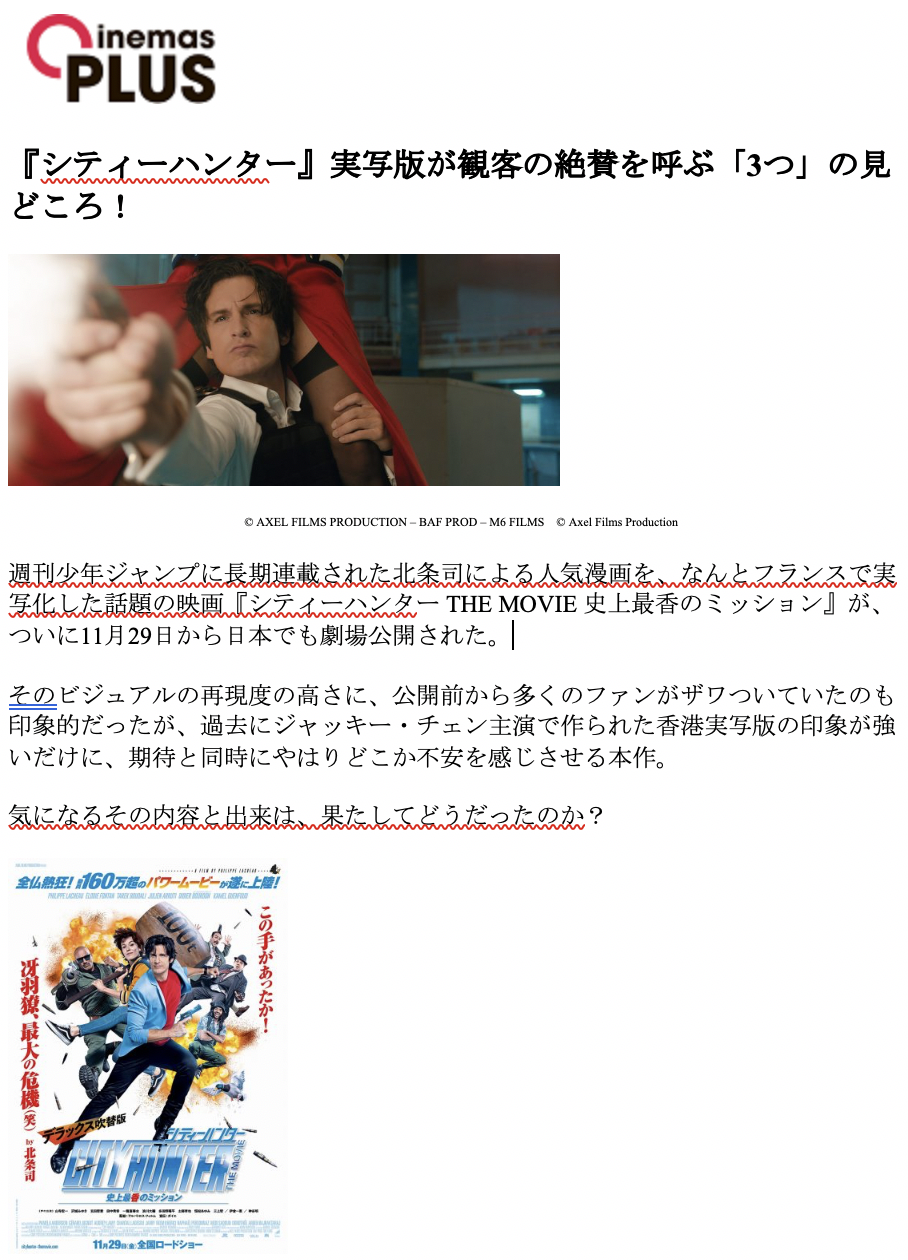 Aside from its associated film market, the Rendez-Vous with French Cinema in Paris welcomed more than a hundred foreign journalists who came to meet French film artists.

Elsa Keslassy, in Variety, enticed by mentioning the names of highly awaited artists such as Isabelle Huppert, Catherine Deneuve, and Omar Sy. 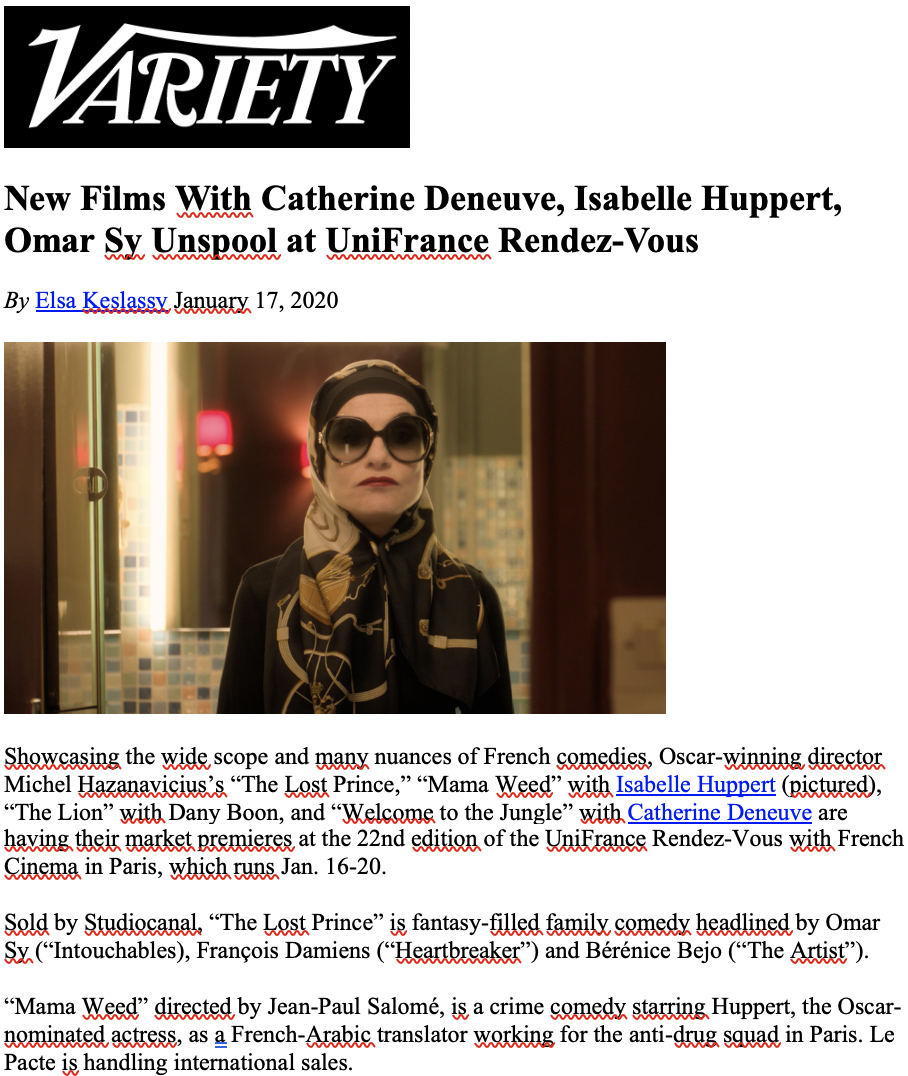 For the Brazilian journalist Roberto Fonseca at the Correio da Manhã, the Rendez-Vous is "a showcase for French jewels." 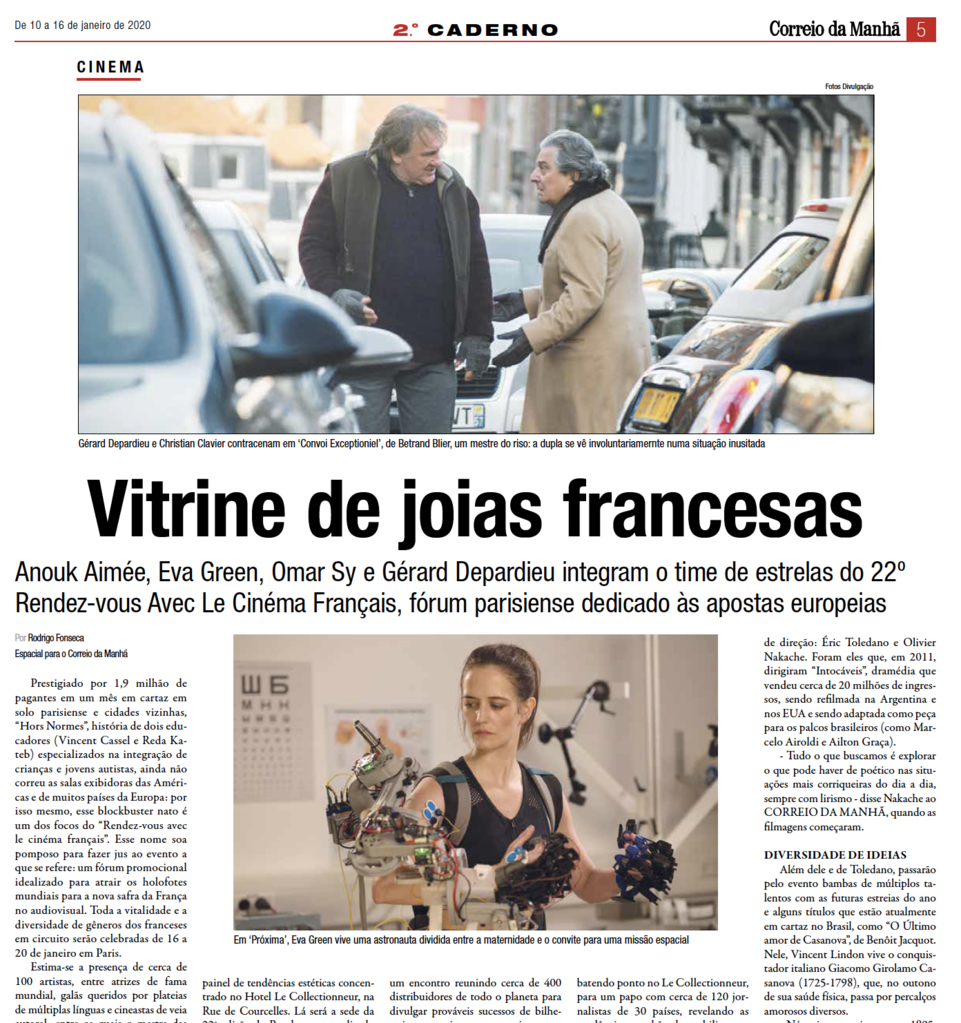 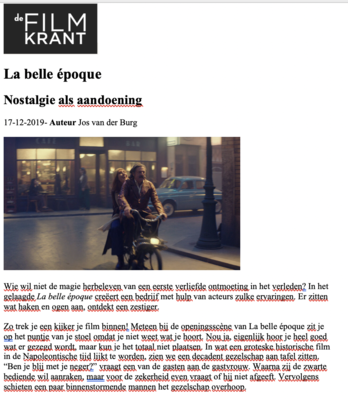 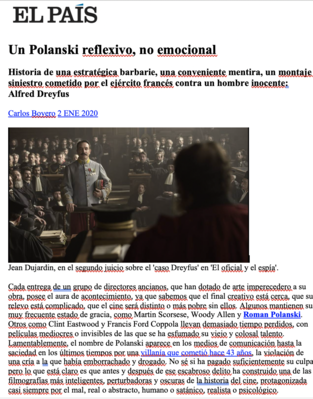 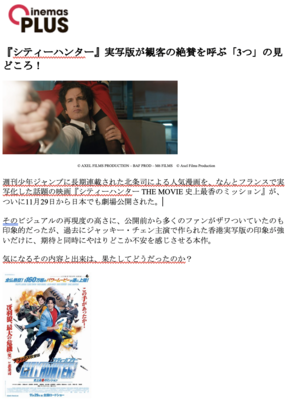 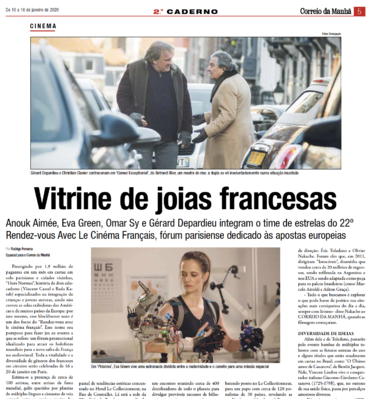 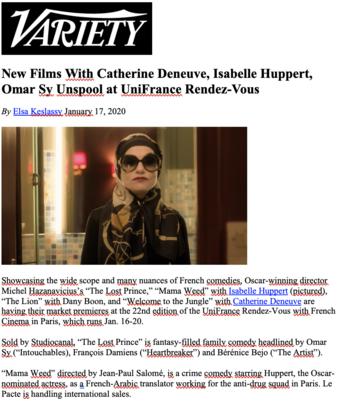