Preview screening of The Gate in Cambodia

Régis Wargnier's latest film, which is set in Cambodia during the Khmer Rouge regime, was presented in a preview screening in Phnom Penh in the presence of the Cambodian Minister of Culture.

Unifrance accompanied the preview screening of Régis Wargnier's film The Gate in Phnom Penh on November 19. This screen adaptation of the book Le Portail by François Bizot is a Franco-Cambodian co-production by Gaumont, Les Films du Cap, and the Bophana Center, which is run by Rithy Panh. The film received an enthusiastic welcome from audiences, with the Cambodian Culture Minister, Sackona Phoeurng, highlighting the authenticity of the film, which portrays the detention and subsequent liberation of François Bizot, a researcher with the French Research School of the Far East who was kidnapped by the Khmer Rouge in the early stages of the conflict.

This trip to Cambodia also gave us the opportunity to meet with two Cambodian distributors, Sabay and Westec, who operate theaters in Phnom Penh. Westec recently released three French films: The Intouchables, Minuscule: Valley of the Lost Ants, and Lucy.

In a separate event, the Cambodian Film Commission will be hosting the 5th Cambodian International Film Festival from December 5 through 12, at which The Gate will be once again presented to Cambodian audiences in the lead-up to its commercial release. 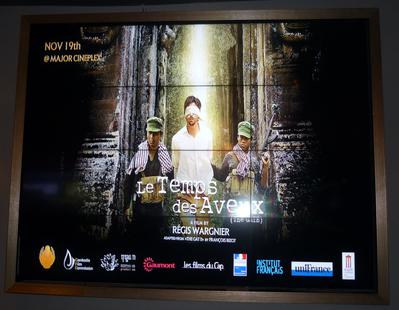 Recent filmography : How I Became a Super Hero, The Deep House, A Mermaid in Paris, ...