It's a fairly large-budget, swashbuckling costume drama set in the 16th century in the court of Catherine de Medici. She, at the time, was trying to reconcile Catholic and Protestant factions in France. She promises to marry one of her ladies-in-waiting to a prominent Protestant nobleman (who's portrayed as the bad guy in the piece), in exchange for his promoting peace. But the lady has already promised herself to a Catholic nobleman, whom she loves, and who is a good buddy of her brother's. The Protestant taunts the brother about how he's going to have his sister; they fight a secret, illegal duel, and the brother gets killed. Finally, there's a big tournament between the rival lovers, the Catholic and the Protestant, with jousting and swordplay and whatnot. The Protestant is winning. But while this is going on, the he is betrayed by a former lover, and revealed as the murderer of the brother. Catherine de Medici orders a group of her men-at-arms to arrest him, but he refuses to be taken alive. He fights to the death. As he lays dying, he asks his mother--the so-called 'Queen of the Protestants'--to forgive. But she has a vengeful look on her face... The Catholic nobleman and the lady are back together, smiling. Some dust blows in the wind. 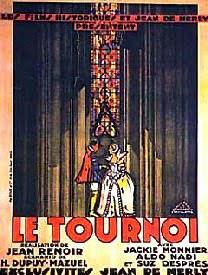