Nara Normande was born in Guaxuma and later moved to Recife, where a new generation of Brazilian directors was about to emerge. In 2014, she co-directed with Tião a live action fiction, Sem Coração, that received the Illy Prize of Best Short Film at the Director's Fortnight. In 2018, her last film, Guaxuma, mixes several animation techniques all connected to sand. 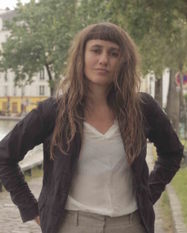 French films and UniFrance at the Annecy Film Festival