With a jury led by the Taiwanese director Hou Hsiao-Hsien, the International Golden Horse Festival was held November 8 through 28 in Taipei. One quarter of the 200 films showcased at the event were French productions and co-productions, including Love, Camille Rewinds, Our Children, Laurence Anyways (screened in the presence of Melvil Poupaud, and Holy Motors (to be released December 14), which was screened as closing night film in the presence of Leos Carax. The festival also featured a retrospective of films by Chris Marker.
The screenings held in the presence of Melvil Poupaud and Leos Carax were sold out as soon as ticket sales opened. During his stay in Taiwan, Melvil Poupaud also met with audiences at the Kaohsiung Cinematheque for a special screening of A Summer's Tale by Eric Rohmer, coinciding with the re-release of Rohmer's Tales of the Four Seasons this year in Taiwan.

A festival that has grown in size and scope in recent years (now boasting audiences of 150,000) and which has broadened its international appeal, the Taipei Golden Horse Film Festival now comprises four separate events: the International Film Festival, the Golden Horse Awards (with a ceremony honoring Chinese-language films), master classes led by up-and-coming directors held at the Film Academy, and the Promotion Project designed to stimulate dialogue and co-productions between Chinese filmmakers and international movie industry partners, at which a forum was held this year aimed specifically at co-productions with France.
After Taiwan, Melvil Poupaud traveled to Hong Kong to present Laurence Anyways at the Gay and Lesbian Film Festival and to meet with local media to promote the film, which will be released in January 2013. This festival also presented two other French films: Our Paradise by Gaël Morel and Les Invisibles by Sébastien Lifshitz.
Leos Carax also traveled to Hong Kong, where Holy Motors (which will be released in February 2013) opened the Hong Kong French Film Festival . The city's longest-standing festival, the Cinepanorama showcased around forty films this year, including a Gala Premiere featuring Amour, Crazy Horse 3D, In the House, and Happiness Never Comes Alone, as well as a retrospective of films by Claire Denis. Special attention was given this year to films that had not yet secured local distribution deals, with promotional efforts directed at potential buyers.

Sophie Marceau traveled to Beijing from December 1 to 3 to promote Happiness Never Comes Alone. Released across China on November 27, it is the first French-language film this year to be included in the import quota on a revenue-sharing basis. It is the fifth Sophie Marceau film released in China since 2003, with the resounding success of Belphegor highlighting the actress's high popularity with Chinese audiences and distributors. Happiness Never Comes Alone has also been showing in Hong Kong since November 29. 2012 has seen an increase in the number of French films released in China, with 9 titles hitting the screens against 3 titles in 2011. 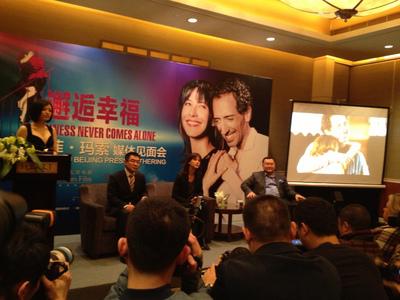 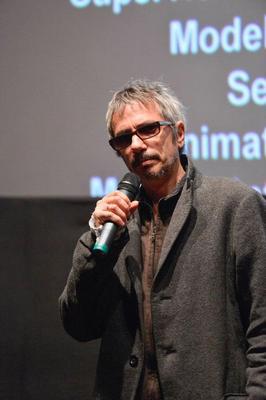