"Saype's Hands," a documentary about an artist whose works reach beyond borders

Saype's name is still little known, but his monumental works have an immediate effect, carrying a universal message accessible to everyone around the world. Pierre Lallement, productions director at JAGUANUM, and Sandrine Frantz, managing director at Lukarn, who is handling international production for this fifty-two minute film, invite us to discover the first portrait of this land art practitioner, about whom we're sure to soon be hearing more.

Unifrance: What triggered the idea to produce a documentary about Saype?

Pierre Lallement: One day my wife told me about this artist, and that what he was doing was incredible. We decided to go and see him. My wife was very involved in land and street art, yet neither of us knew him. When we met him, he had just launched the "Beyond Walls" project, a series of gigantic paintings of interlaced hands done in various sites around the world, with the ambition of forming a human chain. At the time, I was working with Yann Arthus-Bertrand – a connection Sandrine and I share. I contacted Yann and introduced him to Saype's work, and he too decided to come and meet him to see Beyond Walls, Step 1: Paris (interlaced hands spanning the length of the Champs de Mars) from the top of the Eiffel Tower. Saype must have thought that we knew people.

Later, my wife, who has worked a lot in West Africa, organized "Beyond Walls" with Saype in Benin and Ivory Coast, which allowed us to establish a strong bond and a relationship of trust. One day, I told him that I had to make a film about him, and he immediately agreed!

As small producers, there are some works that only we can tackle. Major media outlets would be interested in a more general film about street art, but not in a film about Saype. We want to propose this portrait to the major media outlets, as a unique work about this artist.

How were the various partnerships formed around the project?

PL: France 3 Bourgogne-Franche-Comté, Saype's home region, quickly came on board. Saype was also planning to create a work in Réunion Island, which allowed us to secure support from Réunion Première.
We also received selective funding from the CNC and PROCIREP, and we still have funding applications pending with the regions.

The encounter with Sandrine Frantz also happened very early into the project. She quickly sensed the project's potential. On her recommendation, we decided to go and shoot in Northern Ireland, in addition to France, Switzerland, and Réunion.

The shoot was hence highly international!

PL: Indeed, we've already shot in Northern Ireland and in Belfort, during the 100 year anniversary of the territory of Belfort. We are currently shooting the preparation phase for the departure to Réunion Island. Sandrine suggested adding Northern Ireland, following the good feedback we received – we thought that it could be interesting to go to an Anglo-Saxon territory. Especially because of the symbolism that Northern Ireland represents: the symbolism of the wall is extremely strong at this border.

What makes this documentary unique and what are the main features that make it attractive for export?

Sandrine Frantz: Saype is an artist with an international career, his work is starting to be known, although people aren't yet familiar with his name. He is French, lives in Switzerland, and has a profile that, in a way, is already international. His work is accessible to a large number of people, which is not necessarily the case for all contemporary artists. When I talk about the project to broadcasters around the world, the subject appeals to them.

But the "art & culture" category remains specific in television; most broadcasters don't show these kinds of programs. Essentially, it's the public broadcasters who are interested.

PL: Saype has featured in many magazines articles and television news reports, but this is the first documentary that focuses specifically on him as an artist. The universal, immediate, distinct side of his work makes us want to learn more about the person who created it.
The monumental, symbolic aspect of his art is very intriguing. The partners we contacted wanted to know who this artist was. When you see him, you would think he works in construction – it must be said that it is also a very physical job to create such a monumental pieces. He uses chalk- and charcoal-based paint, 100 percent biodegradable. This makes his paint disappear naturally with the wind and when the grass grows.

What aims do you have for the program?

SF: For an artist who has already toured the world with his work, the goal is truly international. I've been pitching this project for a few months now. I started in February at the Avant-Première Music & Media Market. Often, the channels that broadcast music are also those that broadcast programs in the art & culture category. Then I took the project to MIPTV and Sunny Side of the Doc. I'm targetting the whole world.

PL: The international aspect is key: when we see Saype working and speaking in English, he takes on a more international aspect, although his works already cross borders. He was at the opening of the Venice Biennale and exhibited there. He is a rising artist who is attentive to his career.

SF: His works are easily accessible, which allows him to reach a wide range of people and to make an impression. The message is important, but it's not the most distinctive aspect of his work. The question we asked ourselves was: do we wait for it to grow to secure a bigger broadcaster, or do we go for it right away, with maybe less funding but a lot of ambition. We chose the "a bird in the hand is worth two in the bush" approach and are very proud to have embarked on this adventure. I think there will be many others.

PL: We have France Télévisions on board, but two channels will broadcast it jointly during its first run, France 3 Bourgogne Franche Comté and Réunion Première, in the spirit of union of Saype's works.

PL: I'd first contacted a friend, a distributor in current affairs, who redirected me straight away to Sandrine, who works in this field. Finding the right distributor is very important. Right from the first meeting, it was obvious that working with Lukarn for this film was the way to go.
Distributors have to be involved in projects from the very beginning. Sandrine's idea to go and shoot in Northern Ireland in Belfast is a perfect example.

SF: Yes, the distributor's job is changing: we are increasingly working in advance on projects, especially alongside producers who want to create a work for the international market. This doesn't change the overall structure of the project, but we give insights into what our clients are looking for, and by suggesting very small editorial changes, this directly gives a project a more international scope that facilitates sales. It's a real partnership.

Could you tell me more about your editorial approach?

PL: We were divided on whether to make a documentary exploring his work through sequences. We quickly realized that the preparation period was the most interesting aspect about Saype's work, the period of reflection that takes place beforehand, the way he thinks about the work. That's what gives his character so much more volume. That's why we reduced the shoot in Réunion and extended it in Switzerland and France, so we could film him during the preparation phase. In addition, the team working with him on the project is made up of very appealing thirty-somethings, which was our good luck because I wanted to make an engaging, warm film.

SF: Our main desire was to make an accessible film about this character, who himself is very accessible.

PL: Sometimes you just have to feel things, like Saype who has an atypical background – he commits, he goes for it. It's particularly interesting when you hear him talk to his inner circle: that's when you see their professionalism and their desire to embark on projects.
We hired a young cameraman, who integrated very well into the group, which allowed us to establish a close relationship with them. This is essential, because they share intimate moments with the cameraman and the director. People have to be able to forget about the camera in order to be comfortable.

Trust seems to be an important notion, whether it's the team you work with, the meeting with Saype or between both of you.

SF: Yes, especially on this type of art & culture film. We're going to follow an artist for weeks, which effectively implies trust. For Saype, there's also the issue of image: the one conveyed in the documentary represents his career, so you have to be very sensitive to that. But he has been surrounded by the right people.

PL: During the project's development, I brought in a coproduction company from Réunion, Nawar Productions. I realized that having support on the spot, with local knowledge, was a real asset. Along the way, we brought in Charles Blondeau, a young producer, and we are making good progress together. In particular, the Réunion Island Tourism Board has joined the financing plan, which represents significant support. It's positive, because it also shows that we can finance with alternative means and small broadcasters.

Saype will also give us access to his archives, which will allow us to trace his career and the works he has done so far.

All this makes us want to discover the work and the artist!

PL: That's the effect he seems to have everywhere with his images! He generates this enthusiasm.

SF: I got the same reaction from Artv in Canada. The buyer didn't know Saype and went to look at his work. Immediately, he told me that it was great and that he was very touched by his oeuvre – I'm convinced that we will sell to this buyer, because selling programs is also a question of an encounter between a person, a broadcaster, and a film.

PL: Saype is a very human person, anchored in reality – he thoroughly researches the places he goes to. When he went to Benin with my wife, he wanted to do a five-day road trip first to familiarize himself with the local people before starting his work. He's a caring and engaging person. 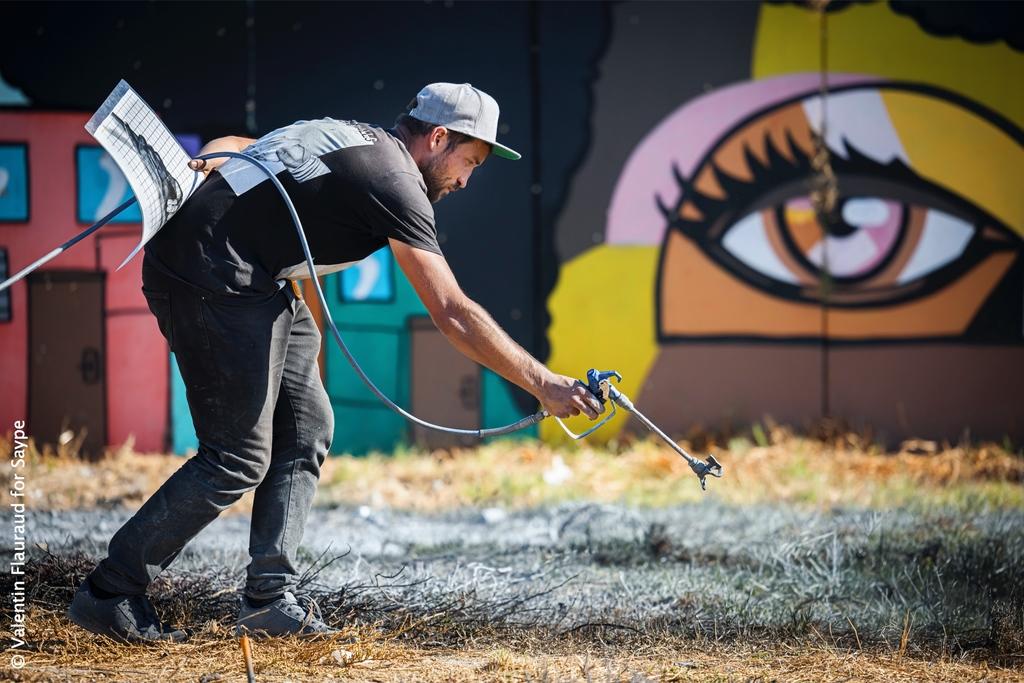 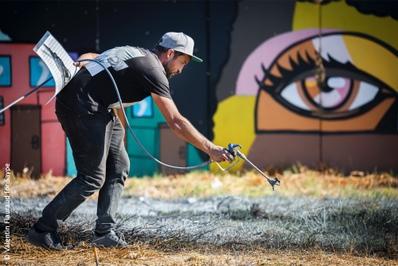