In this collection of interviews "Keeping in Touch," French filmmakers and actors currently in lockdown due to COVID-19 answer the questions of international journalists for whom French cinema remains a far-reaching voice and vision.
For this new long-distance interview, UniFrance has put director Costa Gavras in touch with the Spanish journalist Luis Martinez Lopez (El Mundo). 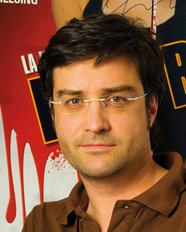 Luis Martínez López - SpainLuis Martínez López: How are you? Where and how are you spending lockdown?
Costa Gavras: I'm fine, thank you. I am experiencing lockdown as a privileged person who is not confined to a fifty-square meter apartment with two or three children, or more... I dip into the past, into books read, and into old archives, and I get rid of what once seemed a necessity, or had charm, or I even felt passionate about. And which, with time, has lost its appeal.

How do you think the crisis described in your film Adults in the Room is similar to the one currently caused by the pandemic in Europe?
They are of a different nature at the moment. The current health and human crisis, the Greek crisis, with its economic and human costs, are like twin sisters and will only become one when the gigantic problem of the debt they have created is confronted and resolved. And it is then that European cohesion and solidarity will be an absolute necessity. The nature of the two crises will then be solely economic and human. Like the one recounted in the film, where each member of the European Union has shown their total disinterest in the Greek people in their distress. They were only concerned with the interests of the banks and the economy.
This is what is currently being repeated in this deep crisis with unknown consequences that is hitting the most deprived the hardest and threatening to destroy our society's gains. What are the European ministers meeting to talk about? Protecting the poorest? No! Money, and even then they cannot agree. The rich want to protect the richest.
And I learnt this very day that The Netherlands, which never stops lecturing southern European countries – the PIGs, reputedly the carefree grasshoppers as opposed to the hard-working ants –, well the Dutch are those who work the least in Europe and who are more in debt than Spain and Italy.

What has surprised and hurt you the most about everything that's been going on?
What doesn't surprise me, but hurts and humiliates me, is to see once again that it is the low-income population that is paying the highest price for this disaster and that it is this group of people who will continue to suffer in the ensuing economic crisis.

You've already experienced Europe in a difficult situation. Do you think that we are currently in the worst moment for Europe since the Second World War?
It's true that the horror of the Second World War is unsurpassed. We dreamed then of a better world – and it was for a very short time. Fanaticism and dogmatism soon won out. Today we are experiencing, despite extraordinary technical and intellectual progress, a head-spinning reemergence of all forms of extremism. Especially neo-liberalism.

How do you imagine the future after the crisis?
I sometimes imagine it with melancholy, starting over just as it was before. I often dream enthusiastically of a future that transcends its differences and faces with determination the problems of Mother Earth and those of the most deprived human beings, like you, dear readers, like me, who writes.

In Spain, the support that culture should receive is currently being called into question with the crisis, and the Spanish Minister of Culture himself considers culture to be an asset that must be protected only after other needs are met. What is your reply to him?
I've observed that all conservative governments, when they economize, start by cutting the culture budget. I think that things of the mind, cultural aspects, help people to reflect, bring them together, and make people accept each other – even more so in times of crisis. Culture frees us from our fears and brings out the best in us. That is why it must be given the same, if not more, consideration as all the other needs of society. It must be financed by the state with the same rigor, and with more enthusiasm.