The program of the 25th Unifrance Rendez-Vous in Paris

The Unifrance Rendez-Vous in Paris will finally return in 2023 in the same configuration as three years ago, before the pandemic. For the second consecutive year, it will be further enhanced by an audiovisual component.

The 25th Unifrance Rendez-Vous in Paris, the world's largest markets and press junket dedicated to French cinema and audiovisual works, are fast approaching! They will take place from January 10 through 17, in the French capital, in several venues and on various dates.
(all figures given below are for information only)

The 3rd Export Day will take place on January 10 at the Publicis Cinémas. More than 20 French and foreign participants will meet to discuss, in four panel groups, the issues relating to enhancing the visibility and export of French cinema and audiovisual creation in 2023.

On this occasion, Unifrance will also present the success stories of French films and the trends of the French audiovisual industry abroad in 2022, as well as reports from invited personalities.

The full program can be found here.

The opening night will take place on January 11 at Le Balzac cinema, with the world premiere of The Crime Is Mine, the latest film by François Ozon, in the presence of the film's cast and crew.

Both markets will take place from January 11 through 13 inclusive at the Hôtel du Collectionneur.

More than 400 international film buyers from some 40 countries are already expected to attend, along with 41 French sales companies. The 81 market screenings (including some 43 market premieres) will be held from January 11 through 14 in the following theaters: Club de l'Étoile, Le Balzac, Le Lincoln, and the Publicis Cinémas.

All information on the film market can be found here.

With regard to audiovisual content, the 110 buyers attending from 27 countries will be able to meet 62 French distribution companies. Buyers will have access to the Screening Room set up by Unifrance to view over 350 programs.

All information on the audiovisual market can be found here.

New for this 25th edition, the French TV Screenings, exclusive presentations of new French programs (documentary and fiction) by 9 French distributors to audiovisual buyers, will take place on January 10 and 11 at the Club de l'Étoile.

They have made a name for themselves in major international festivals during 2022 and will be on screens all over the world in 2023. They are the new faces of French cinema.

Selected for the excellence of their work by international journalists Rebecca Leffler (Screen International), Fabien Lemercier (Cineuropa), Elsa Keslassy (Variety), and Jordan Mintzer (The Hollywood Reporter), these 10 to Watch 2023 embody the reinvigoration of our cinema through the freedom and singularity of their artistic choices, their ambition, audacity, and openness to the world.

Unifrance is proud to honour this new generation of directors and actors, who contribute so fully to the effervescence of French cinematographic creation, and to enhance the distribution of their works beyond French borders.

The list of these ten artists will be revealed on January 12.

A French Cinema Award will be presented to actress Virginie Efira on January 12 at the Ministère de la Culture.
Created in 2016 by Unifrance, the French Cinema Award is intended to celebrate a personality from the international film industry who has worked to promote French cinema around the world.
Since 2016, the award has been given to producers Aton Soumache and Dimitri Rassam (Le Petit Prince), the Italian distributor Andrea Occhipinti (Lucky Red), Chinese distributor La Peikang (China Film Group), German distributor Torsten Frehse (Neue Visionen), actors Isabelle Huppert and Juliette Binoche, the director of the Chinese Cinémathèque Sun Xianghui, Spanish distributor Adolfo Blanco (A Contracorriente Films), and film directors Éric Toledano, Olivier Nakache and Olivier Assayas.

The press junket will take place from January 14 through 17. Dedicated to French films and audiovisual programs to be released or broadcast abroad in 2023, it will be hosted at the Hôtel du Collectionneur, in the presence of 150 French artists who will meet international journalists (103 for film and about 15 focusing on audiovisual works, from 30 countries). It is returning to its live physical format after two editions during which interviews were conducted via video conference.

More than 110 films and 10 television programs will be the focus of these encounters.

Givenchy Parfums and Davines will be handling makeup and styling for the artists attending the Rendez-Vous, while photographer Marie Rouge will be in charge of photo shoots. 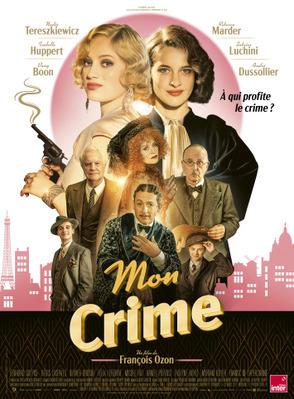 The Crime Is Mine