An adaptation of the Biblical story of Jesus, very loosely and non-narratively, using Christ as a metaphoric symbol of the late '60s protest movement - the "ultimate hippie." The picture also reflects the filmmakers' self-mythologies of existing and functioning as a "religious sect."

"I believe my point of view on the Christian myth is quite clear in The Virgin’s Bed. It is a non-violent parable in which Zouzou incarnates both Mary and Mary Magdalene while Pierre Clémenti incarnates a discouraged Christ who throws down his arms in face of world cruelty. In spite of its allegorical nature, the film contains a denunciation of the police repression of 1968, which was generally well understood by by viewers at the time." (Philippe Garrel)

Point of view
A strange story of Jesus (Clémenti), before his passion. His mother Marie (Zouzou) cannot get him out of the house to do his proselytizing, but eventually he takes bullhorn in hand and gets rejected at every door. He meets Marie Magdalène (Zouzou) who is happy to spend time with him as long as he gives her stones like her other clients. He spends a lot of time with these two women and occasionally goes out to proselytize in the water, on the rocks and in the swamps, He is ridden off his donkey by some thugs on horses while he gives out drugs to various prostitutes along the way. And he sees horrific suffering when his mother opens Pandora's Box. In the end, he wanders off into the ocean while a very pregnant Marie or perhaps Marie Magdalène lies on her back like a beached whale at the edge of the water. Beautiful stark rocky sets with intense lighting and minimal acting. Except for a few scenes with the thugs and Monty Python like fighting apostles, there is little music. Oddly compelling and intense visuals, that might hold anyone's attention, even if they knew nothing about the Jesus stories.

There is an understatedly crystalline moment in Le Lit de la vierge (The Virgin's Bed) when the scarlet woman, Marie Magdalène (Zouzou), having encountered the fragile and aimless Jesus (Pierre Clémenti) for the first time, cryptically explains that the men of the village pay for her company through the archaic currency of stones - and along the way, has amassed a collection that seemingly serves no other purpose than to have the potential having things to throw. The allusion to the casting of stones proves particularly incisive, not only within the loose, Biblical allegory of Philippe Garrel's reconfigured tale of a dislocated, modern-day prophet who crosses paths with (and shows compassion towards) an adulterous woman, but also within the contemporaneity of the widespread social unrest that had defined the political and moral climate of May 68 - a turbulent, yet profoundly transformative era when emboldened, young radicals like Garrel who saw film as an integral instrument of protest were galvanized into direct social action, hurling rocks (as well as more incendiary objects) at riot police during the infamous Night of the Barricades (a personal watershed that Garrel would also recreate in Regular Lovers).

Filmed in the smoldered ashes of the failed social revolution as Garrel and a community of young artists from Zanzibar film (a film collective of like minded, radicalized artists financed by heiress Sylvina Boissonnas) abandoned the emblematic barricades of domestic protest and retreated to Africa to transfigure their ideological disappointment into subsumed cultural action through the creation of an intrinsically personal, revolutionary cinema, Le Lit de la vierge is, in a sense, the reconstitution of a fevered, post-traumatic creative manifesto - an impassioned, reflexive apologia composed in the fog of a drug-fueled delirium that not only reflected a not yet resigned sentiment of implicit denial over the failure of the revolution, but also served to reinforce the counter-culture generation's delusive posture as alienated and discarded messianic ideologues who, nevertheless, continue to hold the keys to an ever-receding utopian paradise. In presenting an idiosyncratically distorted embodiment (or perhaps, resurrection) of fringe society through a sensitive, misunderstood, outcast savior plagued by self-doubt and dispirited by a pervasive sense of impotence against the weight of human suffering, Garrel illustrates, not only the profound loneliness and alienation caused by a singularity of vision (a recurring idealized representation of the May 68 generation as well-intentioned holy innocents that seeks kinship not only with the abstracted heroes of Carl Theodor Dreyer's cinema - most notably, The Passion of Joan of Arc and Ordet - but also posits their intrinsic state of immanence, as revealed through their allusive alter-ego's consuming empathy for the oppressed and the marginalized (an altruistic desire for connectedness that is reflected in Jesus' despair over the seemingly anachronistic sight of bohemians being harassed by authorities within the sanctity of their own commune-like cavern dwellings).

But more intriguingly, Garrel's fusion of iconic cultural history and allegorical social commentary also provides the prescient framework for what would become the inevitable mythologization of the events of May 68, where personal memory has been tinted by the idealized nostalgia of unrealized history, and irreparably altered by the intoxicated haze of (trans)formative years lived under the influence - creating an illusive (and delusive) romanticism borne of a need to reconcile a generation's spiritual desolation with a sense of irrecoverable enlightenment that has been obscured (if not extinguished) by its own reclusive, escapist, and self-destructive behavior. It is, therefore, perhaps not surprising that the seemingly irreverent, Freudian casting of Zouzou in the dual role of the Virgin Mary and Marie Magdalène alludes to a duality of human nature that filmmaker Jean Eustache would subsequently explore in The Mother and the Whore, a film that also chronicles a moral self-destruction in the aftermath of the failed revolution. It is this perverted romanticization of incorruptible idealism and integrality of vision that is inevitably captured in the film's final image of Jesus marching out to sea that, like the indelible image of the wide-eyed innocent child of Le Révélateur, becomes a symbolic act of willful resistance against the raging tide - a gesture, not of benevolent self-sacrifice, but a staged, empty spectacle of quixotic defiance.

In Le lit de la vierge, Philippe Garrel’s marvelous retelling of the Christ story, Jesus (a frail, haggard Pierre Clémenti) is born into a world that already knows about him and doesn’t care. Unable to communicate with people or get them to listen to him (“I am the savior!” he shouts, knocking at doors and windows that remain shut), this Jesus is fearful, incapacitated, and dependent on women. Late-’60s icon Zouzou (later the Chloé of Eric Rohmer’s Chloé in the Afternoon) plays both Mary and Mary Magdalene. The distinction between the two characters blurs as the film progresses — they both become Woman, a ubiquitous presence who both attracts and repels Jesus (at one point he becomes enraged and apparently beats her to death). He consoles no one, though he does manage to coax a little girl into climbing out of a pit; he has no disciples until, late in the film, he picks up two scarecrow-like waterbearers (in the next shot, the two are standing in a river beating each other up).
Shot in Brittany and Morocco in black-and-white Cinemascope, Le lit de la vierge consists of sinuous long takes that follow human figures through ribbons of deep black space. The film is circular. It begins with a kind of birth: Mary is lying on her back, apparently on a barge or a small pier, her knees apart in the air; Jesus emerges out of the water and she towels him off. At the end, Mary is lying on the shore, huge-bellied, and Jesus leaves her side to walk off into the sea. For Garrel, Christ’s life on earth is not a singular advent but an eternal return — a perpetual cycle of pain and disappointment. 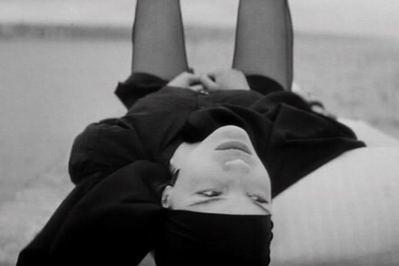 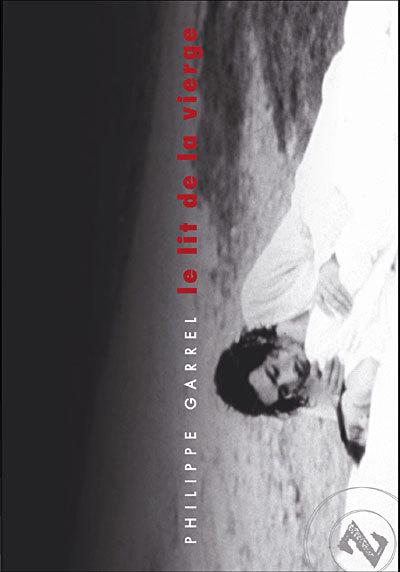