Born in 1991 in France, June Balthazard studied at the Higher Institute of Fine Arts (ISBA) in Besançon and alongside this, at the Higher School of Art and Design (HEAD) of Geneva in the department of Cinema and Cinéma du Réel (film of reality). She also took a post-diploma at the Fresnoy - National Studio of Contemporary Arts where she directed two documentaries: La rivière Tanier (The River Tanier) and Le baiser du silure (The Kiss of the Catfish).

In her work, she mixes heterogeneous elements. In particular she confronts the documentary with forms that are more detached from reality. But these, rather than betraying it, throw a new light on it and transfigure it.  In this sense, her films are marked with touch of magic realism.

Her work has been shown in exhibitions such as Les liaisons équivoques (Ambivalent Liaisons) at the Fine Arts Museum of Dole, during lectures such as the Special Sessions at the FRAC - Regional Fund of Contemporary Arts – Franche Comté region of France, as well as in festivals, in particular the Nyon Festival Visions du Réel, where she received the Opening Scenes Prize, 2018.

The Kiss of the Catfish 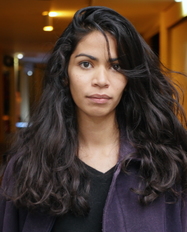