The Franco-Chinese Film and Television Meetings

Organized by the CNC, Ambassade de France in China and Unifrance, with support from SAPPRFT, Institut Français, and TVFI, the Franco-Chinese Film and Television Meetings will bring together industry professionals from both countries in Beijing, on March 10 and 11, 2016.

The goal of these meetings, which will bring together Chinese and foreign audiovisual professionals established in China, and French professionals working or hoping to work with China (directors, producers, theater operators, agents, distributors, TV and internet broadcasters, buyers and sellers): to take stock of recent Franco-Chinese collaborations (coproductions, content sales and acquisitions, postproduction and film shoots in France or in China).

This forum will broach the question of encouragement and support for shooting in both countries, the technical expertise available in the production field (animation, special effects, digital tools), as well as the development of and research into shared contents. Last but not least, the potential for dissemination and distribution of national productions and coproductions will be examined.

Alongside the main forum, individual meetings concerning 5 coproduction projects with French and Chinese experts will take place. These will enable more in-depth exchanges concerning the projects' applicability to the expectations of the French and Chinese markets, about possible partners, and the projects' financial and administrative arrangements.

At a moment when the Chinese market is on the way to overtaking the American box office in 2017, to become the leading world market, China is an essential partner for French audiovisual professionals. In fact, China was already the leading sales market for French cinema in 2015, with 14.7 million admissions, ahead of North America (14.4 million) and Mexico (9.4 million).

In 2015, 6 Franco-Chinese film productions were released in theaters, and numerous projects are underway in the fields of television, documentary, and animation.

All infos to be found here. 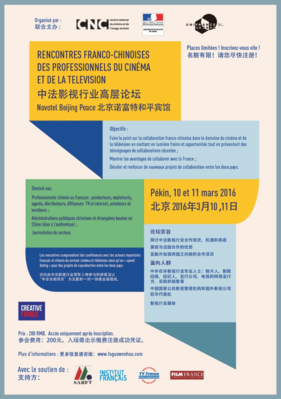