Telefilm Canada and Unifrance marked the 40th anniversary of the Canadian and French presence at the Toronto International Film Festival (TIFF) by announcing, yesterday evening, that they would launch a partnership focused on the distribution and promotion of independent films from their respective countries. Film crews from Canada and France attended the event, as did representatives of the media and the international community attending TIFF.

The public agencies stated that their first venture will target the U.S. market and will involve two existing programs: one French movie will be included in Telefilm’s recently announced Canada Cool annual film tour, and one Canadian French-language movie will take part in the Young French Cinema tour, a program organized by UniFrance films and the Cultural Services of the French Embassy in the United States. The goal of these initiatives is to grow audiences for independent films and to showcase French and Canadian talent through a wide variety of venues across the United States. The selected films do not yet have U.S. distribution or have not yet been launched in the U.S.

“We decided to join forces and launch this partnership at TIFF because the Festival is an outstanding catalyst of talent and success for the industry in North America and elsewhere,” said Carolle Brabant, Telefilm’s Executive Director. “We want to enhance the visibility of our respective film industries by seeking out new, non-traditional distribution venues, including repertory and art house cinemas, in order to attract audiences interested in discovering new films and artists—a very vibrant segment of the U.S. movie-going public. Ultimately, we expect that several of the movies will make their way onto other viewing platforms.”

“I’m delighted with this new partnership, which will make it possible to better showcase our creative film talent,” said Isabelle Giordano, Executive Director of UniFrance films. “This initiative also provides a wonderful opportunity to spotlight the diversity of imaginative worlds and sources of inspiration that move our filmmakers—which is essential, I believe, in the context of filmmaking around the world today.”

Canada Cool, an annual tour of Canadian films in the United States, launches this fall. The selected movies—12 critically acclaimed and award-winning comedies—are being offered to the U.S. art-house circuit on a pick-and-choose model, with marketing support provided by Telefilm. According to Laurence Kardish, who is curating the series, Canada Cool highlights clever, lively and mischievous filmmakers, and the films all share an ambitious originality.

Young French Cinema, a program organized by UniFrance films and the Cultural Services of the Embassy of France in the United States, targets art-house cinemas, film societies, the Alliance Française network and American universities. It offers American audiences a selection of films by young French filmmakers, a generation with a global vision and an amazing capacity to combine cultural influences. 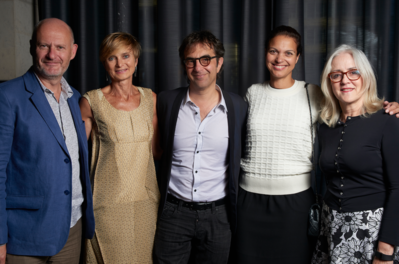