Unifrance relays the Call from Europe's Filmmakers, launched April 9, 2015, from the Rendez-vous with New French Cinema in Rome.

On April 9, during the 5th edition of the Rendez-vous with New French Cinema in Rome, the Institut Français Italia and the Ambassade de France in Italy, with Unifrance, ARP  and the Film Paris Région (Commission du film d'Île-de-France), in collaboration with the Roma E Lazio Film Commission, hosted a morning of discussions about improving the exhibition of European cinema on public television channels and VOD platforms, and about copyright statutes in Europe.

In this context, a call from Europe's filmmakers for better exhibition of European productions in Europe, which also supported enforced copyright, was launched.

The first signatories are:

A CALL FROM EUROPE'S FILMMAKERS

Today's talks, during the Rome Rendez-Vous, all testify to a shared urgency: as copyright’s core principles are being questioned by some who erroneously think they hinder the circulation of productions and culture, we want to set out a new way of exhibiting our films. We want to redefine how films can circulate from one country to the next.

Our films present, each in their own way, through our filmmakers’ eyes, a vision that is both more personal and collective of what Europe is and can be. They speak of Europe's complexity: its violence and its joys, its distortions and its realities, its conflicts and its bonds, its absurdities and its dreams…

Our films are a form of hope, and they humbly but surely contribute to the construction of a European identity.

At a time when a number of our countries are facing new obscurantist trends reeking of hatred, a glimmer of hope can come from cinema.

For this reason, it is our responsibility to think of ways to improve the circulation of national productions throughout our continent. We have to do so while ensuring that we do not hinder the vitality of cinematographic creation.

It is not normal that the films of Europe struggle to be accessible to spectators throughout the continent.

Therefore, we ask the public authorities and institutions of Europe, our national regulatory bodies overseeing cinema, the EFAD, and television broadcasters, to collectively think with us of positive action that can be taken to encourage the distribution and promotion of European productions, in order to ensure the wide circulation of the full range of these cinematic works throughout Europe.

For this to be possible, we need to address the various means of exhibition:

-       Movie theaters: Efforts have to be maintained to compensate for the lack of theaters that still exists in a number of places. We need to ensure that no existing theater is shut down, and enable new ones to be set up. Independent theaters should not be neglected when it comes to upgrading to digital equipment. Particular attention should be brought to bear on funding that can facilitate and speed up theatrical distribution on a European scale: movie theaters remain the best place for films to find their audience.

-       Television broadcasters: We ask that public broadcasters work on a charter for more widespread exhibition of European films, with a focus on exchanges, along with mutual and reciprocal programming. Broadcasters should also be supported in the development of their range of digital options (especially catch-up TV services), based on a healthy economic model that does not undermine value. The hope for an independent European digital film platform should be a credible goal, and television broadcasters could very well be central to such an initiative.

-       VOD platforms: We need to rethink European regulations so they are relevant and enable new European players to emerge who are capable of competing with global giants.The Internet has long been the subject of our worries, made manifest by the devastating effects of online piracy. We want to believe it can today become a leading partner of European cinema, be part of a virtuous circle arising from sharing wealth and value between all those who contribute to financing cinematographic creation, and become an exceptional means of exhibiting our films.

For all this to be possible, the European Commission must adapt some of its directives relating to audiovisual media and to tax systems. The commission needs to set itself two goals: to spur the development of European players who finance and publish, exhibit, and distribute European cinema; to incorporate global Internet giants within a tax system and economy relating to cinematographic creation.

We must urgently devise a cultural tax system for operators in the globalized exhibition market. The ideas posited by French Minister of Culture, Fleur Pellerin, concerning taxing bandwidth usage, should be taken into consideration and thoroughly explored.

We henceforth ask the European Commission to develop, through Europe Creative, new means for the quality subtitling and adaptation of European films in other European languages. The availability of our films in other languages allows for better circulation on public television channels and VOD platforms, and speeds up theatrical distribution on a European and global scale. We are increasingly seeing that the availability of films, through legal channels, is also a way to hinder piracy and prevent its disastrous effects on cinematographic creation. The European Commission must adopt an effective and courageous stance against piracy, and needs to promote initiatives that enable films to be available throughout Europe.

We share the European Commission’s determination to facilitate the access to films for everyone. Films are an essential part of understanding, and learning through images. Beyond this, films are without a doubt a means toward developing awareness and educating consciences. Let us not be mistaken in how we address this: it would be very destructive to filmmaking.

Our shared bases, such as copyright and cultural exception, must be protected in order to serve as a catalyst for a new European cultural policy. 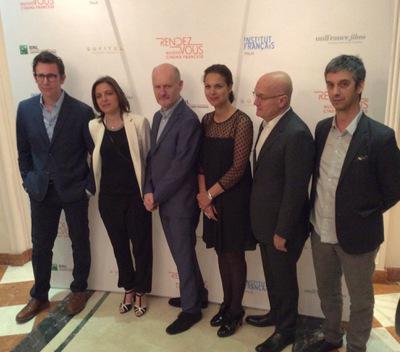