Philippe de Chauveron's film has been a runaway success in Germany, and a theater in a small town in the eastern part of the country has found a fitting way to celebrate the event.

The 2 millionth spectator of Monsieur Claude und seine Töchter (the title of the German version of Serial (Bad) Weddings) had the red carpet laid out for him at the Kapitol-KulturKino theater in Königs Wusterhausen, a town in the greater urban area south of Berlin. Initially greeted by strange clones of Monsieur Claude, Kai-Uwe Hempel (the lucky spectator in question) was given flowers and a basket of French delicacies including Calvados and wines.

Enough to incite him to continuing to see French films. 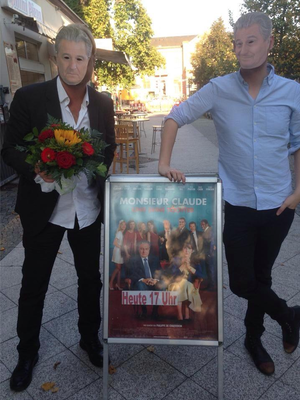