UniFrance Films box office report: Me, Myself and Mum travels to Italy

Guillaume Gallienne's film Me, Myself and Mum makes a successful debut in Italy.

Me, Myself and Mum by Guillaume Gallienne has got off to a good start in Italian theaters (released by Eagle Pictures), where it has pulled in over 26,000 spectators from 46 prints, thus scoring a place in the local box office Top 20. A film that caused a sensation at the 2013 Cannes Directors' Fortnight is likely to maintain its present momentum and rapidly reach 100,000 admissions. In French-speaking Switzerland (JMH Distribution), this debut film by the actor Gallienne has registered 38,000 admissions after 10 weeks, marking an impressive performance in this market, in which only seven French films have managed to cross the 30,000 admissions mark since the beginning of 2013. Me, Myself and Mum currently boasts a total of 136,000 admissions outside France.

Jamais le premier soir by Mélissa Drigeart has achieved a successful opening week in Belgium (Belga Films), where it has amassed just under 15,000 admissions with 15 prints in circulation. With results hovering around 1,000 admissions per print, this ranks as the fifth highest weekly average in this market. In the romcom category aimed at adult audiences, the previous release of A Happy Event (Cinéart) registered less than 6,000 admissions from 20 prints in its opening week. However, in the same period, Second Chance (Benelux Film Distribution) topped 20,000 admissions, with 17 prints released. Jamais le premier soir has also attracted close to 14,000 spectators in French-speaking Switzerland (JMH Distribution) after four weeks on the screens.

Stranger by the Lake enjoyed an encouraging launch in the USA and English-speaking Canada (Stranded Releasing), grossing just under $40,000 from just two prints (around 4,600 admissions). The film by Alain Guiraudie thus registered the second highest per-print average of the week in these markets (almost $20,000 per print). The number of prints released is set to increase in upcoming weeks, allowing it to easily top $100,000. Stranger by the Lake, which earned Best Direction honors in the Cannes Un Certain Regard section in 2013, posts a running total of 62,000 admissions in international theaters, including 28,000 in Italy (Teodora) and 13,000 in Germany (Alamode). 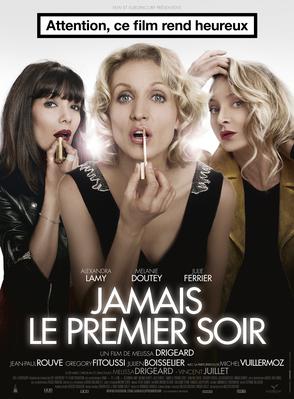