Éric Lavaine traveled to Argentina with UniFrance films to present his film Barbecue. He shares with us his thoughts and impressions gleaned from his visit and the three screenings of his film held in Buenos Aires.

"Thanks to Unifrance and STUDIOCANAL, I was able to spend a week in Buenos Aires, where my film was presented to the public on three occasions: first up was a screening at the French Film Festival, followed by one held at the Alliance Française, and, lastly, a screening organized by the Argentinean distributor Distribution Company.

I was very fortunate that these three screenings were held to packed theaters (each with seating for 250 to 300 people), and the turnout was nearly all locals. I was able to stay in the theater for one of these screenings and was surprised by the amount of laughter in the theater—which is always gratifying when you show a comedy. It's quite amazing to see that 12,000 kilometers from Paris, people can laugh about the same things (except, of course, when the translation is only approximate). The film was screened in original version with Spanish subtitles, whereas in Spain it was more often shown in a dubbed version.

Before each screening, we gave a short introduction and afterwards we hosted Q&As. The questions asked by the audiences were similar to those asked during a promo tour I did in France to launch the film—with one very big exception: almost no questions were asked about the actors (apart from Lambert Wilson, who is "muy atractivo"). In Argentina, they don't have the same awareness of the star-power that actors like Florence Foresti and Franck Dubosc have in France.

The questions mainly focused on the autobiographical aspect of the film, as well as friendship fatigue and the regions of France... and also Pétrus wine! We could sense a genuine "appetite" for everything "made in France".

I had two sessions with journalists, one with the written press and another for the radio. The interviewers were curious and asked pertinent questions, and showed a lot of respect for French cinema.

Overall, from my impressions of the reactions of Argentinean audiences to my film (in Buenos Aires, to be more precise, where it's a very specific audience compared to the rest of the country), I would say that I felt a strong appreciation for all things French and an eagerness to see French films, including comedies." 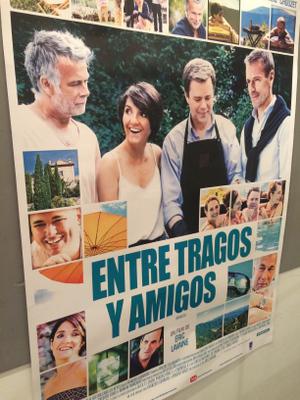