Winner of the Cristal Award at this year's Annecy International Animation Film Festival for his film Man on the Chair, Ron Dyens, producer and mastermind behind Sacrebleu Productions, shares his insights on the animated short film scene in France.

You came back from the Annecy Festival with the Cristal Award for Best Short Film for Man on the Chair, which was also selected at the Directors' Fortnight at Cannes. Can you tell us about your adventures working on this co-production with South Korea?
Strictly speaking, it was actually more a co-production with the director than with South Korea. A number of years ago, we launched a project to produce a collection of short films on the theme of disobedience. The underlying principle is this: we offer an up-and-coming or established director the chance to direct a film (animated, experimental, documentary, or drama) with a minimum runtime of 4 minutes. There are no restrictions on content other than that there must be a connection with the theme of disobedience. The production company has no input into the screenplay. The director has one year to make the film, with a contract split 50/50 between royalties and a film director's salary. We handle the film's distribution and return 50% of the revenues generated to the director, after deducting promotional and distribution costs. So far, we've made around a dozen films, some of which have enjoyed successful careers, such as being selected at Venice or Cannes, winning the Silver Bear at Berlin, the Cristal Award at Annecy, TV sales, and so forth.

What is your assessment of your participation at the Annecy Festival? Do you agree that this festival has become an essential event for a company like Sacrebleu Productions?
Yes, of course, and that was already the case before this year's festival. By combining shorts, features, and TV series, the Annecy Festival has become a self-sufficient event in its own right, with TV series providing a financial "weapon", particularly through the MIFA Film Market, feature films bringing prestige, such as with free outdoor screenings, and short films placed in the spotlight, both through highlighting their creative and innovative aspects and by attracting (along with features) a large student audience.

What is the current state of the animated film scene in France from the perspective of an independent producer like you?
I would say it's a mixed picture. We obviously can't knock the many indispensable funding schemes that we are lucky to have in France, be that from the CNC - Centre national du cinéma et de l’image animée, regional schemes, or television networks, but it's important to stress that the proportion of payroll expenditures in an animated film's budget is very high, much higher than for a live action film. This is an unavoidable fact. It means that we must have well-financed productions in order to cope with the lengthy production time required and the high payroll taxes that exist in France. After a generous boost that was given to the sector some years ago, funding levels have unfortunately plateaued, even lessened in some cases. This is a great pity as there are many live action production companies these days that are venturing into the animation field. There is a positive dynamic in the sector, especially considering that between 300 and 500 young graduates enter the scene from public and private animation schools each year. We have the feeling that the current system has reached its limits. Co-production is clearly one solution, but it must not jeopardize the amount of funding available for 100% French productions either. The risk is that animated short films may follow in the footsteps of far too many animated features these days, with part of their production being completed outside France. Fortunately, this phenomenon is currently being called into question by government authorities and other bodies, with the implementation of schemes such as tax credit benefits (which are sadly not yet available to short films). So, to sum up the situation, I'd say that the industry has received a boost, but we must not leave it at that. Let's remember that animated films generate salaries, as our Belgian and Chinese friends have clearly understood.

With around 50 short films under its belt, Sacrebleu Productions is currently developing a number of feature film projects. Does Sacrebleu's future lie in feature films?
Sacrebleu was not originally founded to produce feature-length films, just like we didn't initially intend to make animated films. The peculiarity of being a producer is to be curious and to have the resources to make that curiosity a reality. We remain committed to short films, they are part of our DNA, but we won't be refusing any options as we're determined to stay relevant in the industry.

Man on the Chair can be viewed by members of UniFrance Films in our Short Film Gallery. 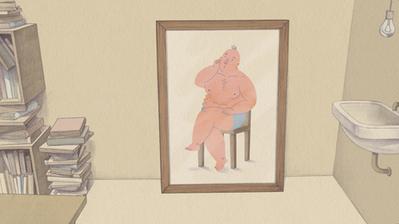