The David di Donatello Awards were first given in Rome in the spring of 1955. Created by a cultural club (then called The Open Gate), the aim was to honour the best of each year’s Italian and foreign films, similar to the American Oscars. Similar prizes had already existed in Italy for about a decade (for example, the Silver Ribbons), but these were voted for by film critics and journalists. However, the Davids have been and are awarded by the people in the industry: screenwriters, performers, technicians, producers and so on.

After Rome, the ceremonies were held at the Greek Theatre in Taormina, then twice in Florence, and finally returned to Rome, always with the support of the President of the Republic and now with the collaboration of the Rome City Council Cultural Policies Department.

The founding organization, now called the David di Donatello Organization is fully functional and works in concert with and thanks to the contribution of the Italian Ministry of the Performing Arts and the Ministry for Cultural Properties and Activities.

The presidents have successively been Italo Gemini (the founder), Eitel Monaco and Paolo Grassi. Currently, it is presided over by Gian Luigi Rondi who has worked with the organization since its inception.

The prizes are awarded primarily to Italian films, with a category dedicated to foreign language films. 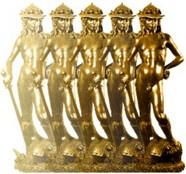