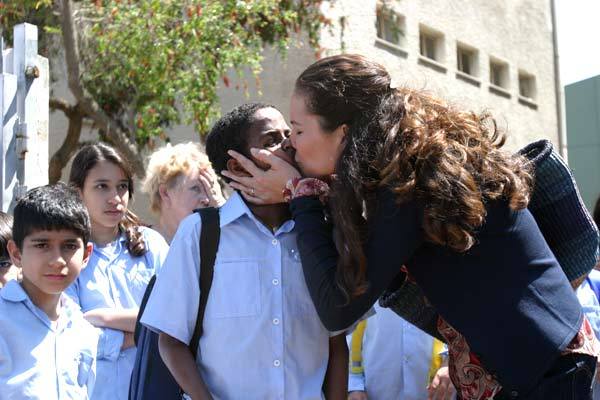 Meskie made alia to Israel from Ethiopia in 1985. She is graduate of the famous Nissan Nativ drama school in Tel Aviv. Meskie started performing in high school in the representative youth group of Addis Ababa. She is the first professional Ethiopian actress and singer in Israel. After graduation Meskie acted in the successful comic play "Me, Judea, and the chief of stuff's sister". Meskie is performing in her one-woman show that she wrote together with Amit Lior. This show was first performed in the 'Teatroneto' festival in Tel Aviv and she was highly commended for her performance. The play is a powerful drama about a Jewish Ethiopian woman immigrating to Israel and involves acting, singing and dancing. Meskie is a singer and performs in Israel and abroad. She has also presented several television programs and special programs on festive occasions such as the tenth celebration of 'Operation Moses' at president's Weitzman residence in Jerusalem. Meskie has performed in the Israeli Singing festival and is involved in two long-term community projects where she helps' through drama both Sabra and Ethiopian children to cope with immigration and everyday hardships. Meskie has been playing in the Israeli production of Sesame Street; a new project with Israeli and Palestinian actors. She has recently finished shooting: A police mini series for channel 3, which is called "Little country, big man". An award winning series for channel 2 called "Zinzana" about the life of prisoners , shot in prison. A series for channel 2 called "The Neiborhood". Recently Meskie is performing ethnic music with her new band in different festivals and recently in the World's Aids day. She is currently working on a disk of her ethnic music.