Review of "How I Came to Hate Math" by Télérama

How I Came to Hate Math
A documentary directed by Olivier Peyon in 2013
Release date in France: November 27, 2013

For many school students, math classes are often seen as drudgery. What's the point of learning all those formulae and the theories of Pythagoras and others that seem so obscure and inflexible, and will never be of any use in the "real world"? Olivier Peyon, director of this documentary, thought the same thing—that is, until he met a mathematician at the prestigious Collège de France. This mathematician claimed that math can be a tool for freedom. Puzzled by this, Olivier Peyon decided to undertake an exploration of this unpopular subject by meeting with eminent mathematicians, including Cédric Villani (winner of the Fields Medal in 2010), Jean-Pierre Bourguignon, and Robert Bryant.

"It's my fate to be hopeless in math!" complains one French teenager. A pimply American kid replies, "I'm good at math, but I don't like it!" Traveling between the Oberwolfach Institute in Germany and the International Mathematicians' Convention in India, documentary filmmaker Olivier Peyon delves into the question of how math has shaken our world and reached into ever corner of our society. He takes a wide-angled view, from examining classic teaching methods to looking at the proliferation of computer data and the importance of math in the world of finance and the subprime crisis—the least convincing section of the film. Packed with interviews, the film plays with clichés, such as "math is inegalitarian and undemocratic, difficult and simplistic, rigorous and imaginative," as described by the "star" mathematician, Cédric Villani, winner of the Fields Medal (the Nobel Prize equivalent for math) in 2010.

In the film's somewhat questionable conclusion, math is set up as a human science: we must think for ourselves, make a virtue of doubt... It is especially interesting for the contributions by François Sauvageot, a colorful math professor and fashion designer in his spare time, who wears a T-Shirt proclaiming, "I'm not a number, I'm a free man", and who almost steals the limelight from Villani. Not to mention the fascinating demonstrations by an IT researcher who stresses the importance of computer science, and the futuristic views of a young math teacher who wonders if doing math in the era of artificial intelligence is not unlike making home-made cheese! 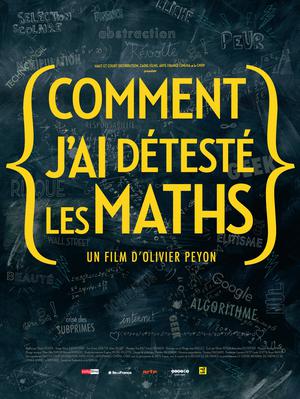 How I Came to Hate Math